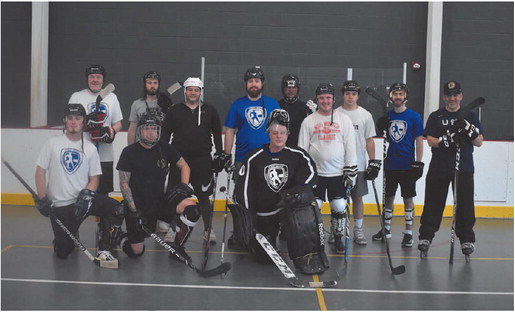 Competitors in the La-Grange Street Hockey League and others from around the south have formed a new team to compete in the National Ball Hockey League.

added to reference their out-of-town members. The team is made up of players from North Carolina, South Carolina, Mississippi, and Georgia, though most of the team is from LaGrange.

Goalie Glenn Cunning – ham helped found the team and has been working hard to get ready to compete in the Carolina Division of the National Ball Hockey League. The team currently has a 19 player roster and is coached by former D-1 ice hockey player, Paul Bono. The Boston native has had years of experience with the local street hockey league and even spent time as a ref eree.

Ball hockey will be a bit of a change for the team, but they are looking forward to being able to compete nationally.

Team Manager Hill Dan – iel advised that the team will have to travel for their games as the rink at the Mike Daniel Recreation Center is too small for Na – tional Ball Hockey League play. The team will play their games in Apex, NC, right outside Raleigh, for a 10 game regular season. The team is expected to play multiple games over the travel weekends.

Team Captain Joseph Shaw said he is looking for – ward to competing against other teams. Shaw said he has played for about eight years in LaGrange. He plays regularly at the rec center on Tuesdays, but those are mostly pickup games and players come and go.

Shaw started playing hockey after coming to the rec center just for some ex – ercise in 2013. He met up with Cunningham for pick – up games and was quickly hooked.

"I never knew hockey," he said. "I came out here in 2013 trying to get some cardio in after the gym and met up with Glen and we've been rocking since." Shaw admits he's not the best player on the team and certainly doesn't have the most experience, but he gravitates toward leader – ship.

Previously, the Hooli – gans have played using a puck, but Shaw said it was dicult to get opponents to play, spurring the change to ball hockey.

The first games will be at the end of April, from Apr. 30 through May 1. After the 10 game season, division winners will advance to the playos for a chance to play for the Mylec Cup.

The Quad State Hooligans ran drills during their all-day practice at the Mike Daniel Recreation Center on Saturday. The players have to get ready for their first games by the end of April.