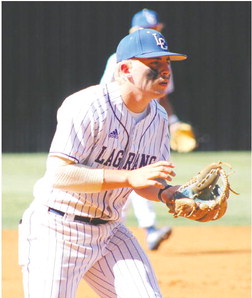 Third baseman Colton Esposito of LaGrange High had his game face on against the Spalding Jaguars in the Class AAAA State Baseball Tournament on Wednesday. Esposito and the Grangers won a pair of games to improve their record to 25-7.

Everything is still attainable for LaGrange High School – including the ultimate.

He came to that assumption after LaGrange High swept the Spalding Jaguars, 10-2 and 13-1 in a first-round Class AAAA State Baseball Tournament series on Wednesday night in LaGrange.

“We all have confidence in this team. We’re getting consistent. We’re rallying, and I’m hitting the curveball,” said Parker.

Actually it was Parker who broke up Jaguar pitcher Elijah Boomer’s no-hitter in the bottom of fifth inning in the first game of the playoff doubleheader.

The game and the playoff series never was the same after that. Parker gave the Grangers a splash of confidence.

LaGrange High went on to pound out 24 hits in the doubleheader, including 10 in the series opener.

In the fifth inning of the first game, Cockrell followed Parker’s single to right field with a base hit to center field.

The bases were loaded one batter after that as Granger shortstop Preston Pressley was hit by a pitch. And LaGrange High pitcher Trey Cook got the Granger fans off the aluminum bleachers as well with a two-RBI single to left field.

The game was even at 2-2, and it was all LaGrange High after that. Spalding High lost its confidence, and the Grangers took over.

“We got aggressive. We chipped away, and we got some timely hits. We put the ball in play,” said Zack Thompson, the Grangers senior catcher.

Thompson found his batting stroke in the sixth inning of the first game. Thompson doubled, as did senior teammate Turner Cook.

The Grangers hung an 8 spot on the Jaguars in the sixth inning. LaGrange High also hung the Jaguars out to dry with a 10-2 lead.

And Robbie Parker of LHS had the go-ahead hit with a two-out single to center field. The Grangers pulled in a 3-2 lead.

Cockrell also followed with a run-scoring single. The Grangers would then put the final touch on a state playoff win with pitcher Trey Cook’s three-hitter.

“We threw the ball. We put it in good spots, and we ran the bases. We did not get frustrated,” said Granger head baseball coach Donnie Branch.

His 6th-ranked baseball team would go out and put 14 more hits on the board in the playoff nightcap. La-Grange High never trailed Spalding in the second blowout of the playoff series.

The Grangers won with some pizazz in a 13-1 laugher at the ball park. La-Grange High led from the second inning to the bottom of the seventh.

The Grangers picked up where they left off from the first game. LaGrange High rallied for a 2-0 lead behind RBI singles from Cooper Stephens and Gryson Cockrell in the top of the second inning.

The Grangers expanded their lead to 4-0 in the top of the third inning. LaGrange High scored on a Zack Thompson RBI groundout and a Spalding High balk.

There were more runs on the way in the fourth inning, too, as the Grangers gave the ball a ride or two with a Robbie Parker single, a Cockrell base hit and a Trey Cook three-run homer to right field.

“They punished us. La-Grange has good players, and we lost the momentum (in the playoff series),” said Spalding senior catcher Ben Griffin, the baseball guy with the .445 batting average.

Griffin gave the Jaguars their only run of the second game with a 330-foot home run to left field in the bottom of the fourth inning.

Granger junior shortstop Preston Pressley keeps an eye on the Spalding base runner and the state playoff action on Wednesday night at Granger Park. LaGrange High swept a doubleheader from the Jaguars, 10-2 and 13-1. 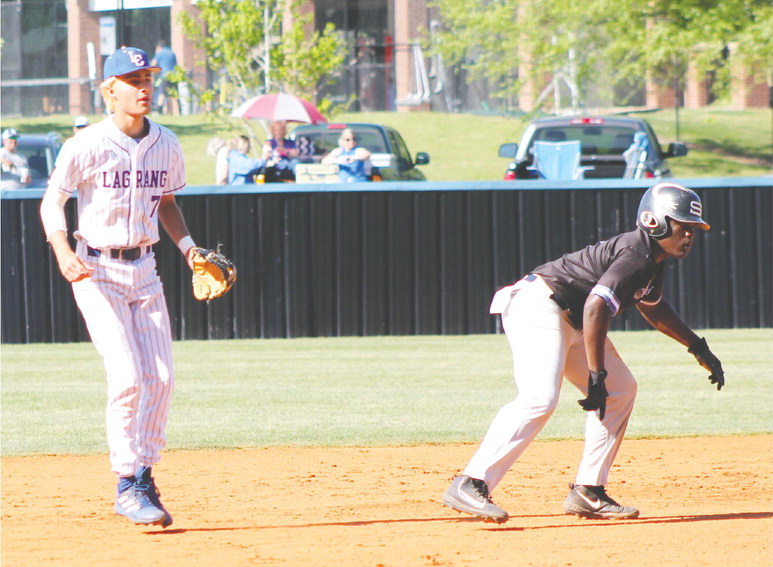