His eyes are glued to the action because he is the action – or at least a huge part of it.

Briggs Scott is all boy at nine years old. He can’t get enough of baseball.

Scott dreams about it when he puts his head on the pillow at night. He dreams about the game just the same when he wakes up in the morning.

As far as Scott is concerned, baseball is the best thing since catsup on french fries. He salivates at both.

And Scott, who plays first base for the Recreation League Tigers in LaGrange, is forever ready for another field full of baseball challenges.

He is getting that, along with wind sprints, Gatorade and batting practice at the David Kelton Baseball Camp this week at La-Grange College.

“I’m practicing hard. I’m working on my hand-eye coordination. I’m fielding and throwing. I’m having so much fun,” said Scott.

What else could there be for a baseball-craving kid from just down the highway in rural Georgia?

“Players have to practice. In this camp we’re throwing and playing in the home run derby. I’m kind of good,” said Briggs.

The camp invites effort on every play and in each baseball drill. The boys and the occasional girl are bringing the gusto to Cleveland Field, the home of the NCAA Division III College World Series participants, the LaGrange College Panthers.

If you’ve seen one baseball player, you have not seen them all. Some future LaGrange College All-Americans could very well be on the field right now in the week-long Kelton Camp.

Hudson Daniel of La-Grange hopes so. He is one of the soft-hearted and the leather-pounding kids in the five-day baseball camp.

Daniel is a ball player, the kind that knows the score whether the scoreboard is turned on or not.

“I’m turning nine today,” Daniel said at the Tuesday morning practice at the camp. “I’m a first baseman, and I love baseball. It’s a family tradition.”

Baseball is much more than that to Hudson Daniel.

“I like the throwing and the hitting,” he said.

Daniel also took to the congregation of players on the green grass of the camp. He was making new friends as he fielded the ball and faced the 90-degree humidity.

But baseball camps in the summer are supposed to be hot, sweaty and draining like a rusty pipe. And so it was on Tuesday morning at the David Kelton Camp on the LaGrange College campus.

It was a special place to be.

Luke Allen was there, and he was playing his ball cap off. Allen is a 10 year old from the neighborhood. He’s a baseball grinder.

“This is my first year at the camp, and it is all baseball. I’m getting more backspin on the ball. I’m practicing my throwing and hitting. I’m learning more about baseball,” said Allen.

The little things count extra for baseball campers like Allen. Baseball mechanics are coming into play.

“I’m getting my steps right. I’m bringing the bat to the ball. It’s fun,” said Allen, the Youth League baseball star from the Cubs.

Luke Allen was drenched with baseball enthusiasm by the end of another three hours out in the sun at the camp.

“You have to work, and it’s hard to win. You have to pay attention,” said Allen, the dedicated baseball camper. 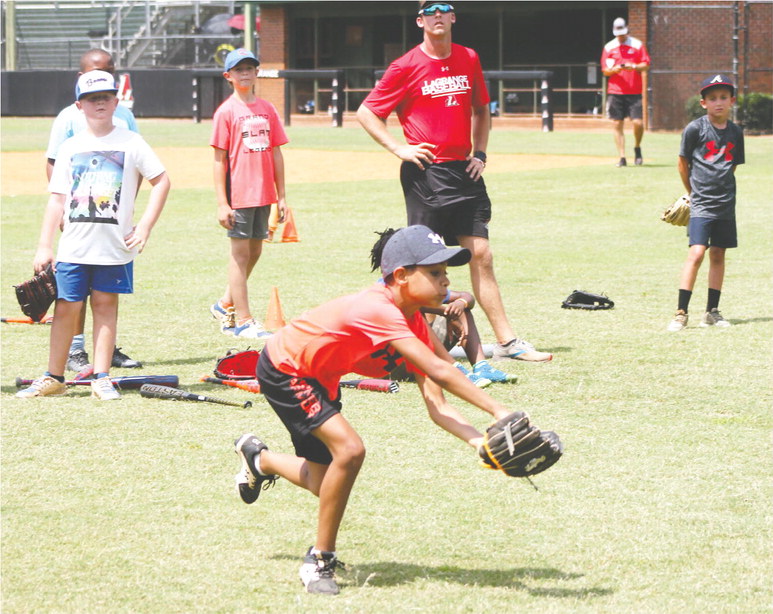 The players were getting a hang of it in the week-long David Kelton Baseball Camp on the LaGrange College campus. The youth players practiced for three hours per day, and it was sticky warm on the field. 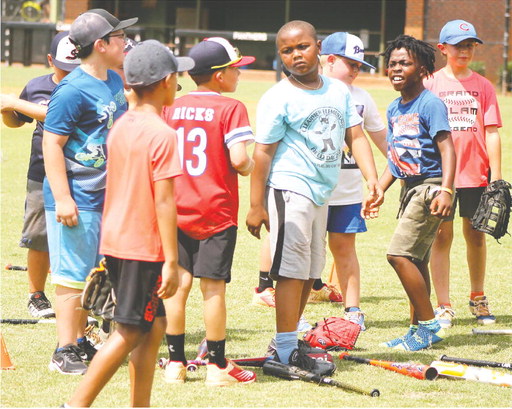 There were plenty of talented players, fast bats and prolonged excitement in the 9th Annual David Kelton Baseball Camp this week at Cleaveland Field in LaGrange. Baseball fundamentals were the main course.