As it turns out, Jose Gonzalez has a flair for the dramatic and the fish.

Gonzalez was not just another guy on the boat. The fisherman from Atlanta was the ace in the hole.

He was the star of the show. Gonzalez was the best angler on the boat, and he had no idea that would be the striped bass case when the day started on idyllic West Point Lake.

Starting at 7 o’clock in the morning, Gonzalez was hoping to catch anything other than a cold on Friday.

And he did stay healthy, amused and hanging on the edge of the boat. Gonzalez, despite minimal angling experience, still caught the fish of envy with a 15-pound striper.

“It took me about two minutes,” said Gonzalez.

It was a tiring and a heated 120 seconds, however, on the lake.

“I felt a lot of weight and a big fish. He was strong, and I loved it. This is my first time out here (on West Point Lake), and I’m coming back,” said Gonzalez.

He would eventually have a five-catch day, all stripers. Gonzalez was fishing with live shad in 20 to 22 feet of water.

Long-term and always- friendly fishing guide James Jordan put Gonzalez in a position to have a fruitful day on the lake. That is the way it is supposed to be. “June is the peak time (for striper fishing on West Point). We caught some quality today. The bite is early, and most of the stripers are caught in the morning,” said Jordan, who hails from Newnan and guides in LaGrange.

He and his party always catch most of the fish they hook, but there is always one or two that get away. That is fishing fate of the evasive kind.

A hefty striper got away on Friday, too.

“We lost a big ‘en. He went under the boat. He headed for deeper water, and he took 50 feet of line (with him),” said fishing guide James Jordan.

But the paying customers on his boat still hooked and boated 14 stripers on the sunny and blue bird-sky day.

The stripers varied in weight from seven pounds to 15. There was one 10-pound striped bass caught, too.

William Priest from East Point, Ga. reeled in three of the stripers.

“We found a good-sized school. We found some good areas, and we had a good guide (on the boat). He knew all the spots (to fish). All you had to do was keep the rod up and get to reeling,” said Priest.

Hunter Lance, an angler from Jackson, Ga., was on the boat and was baiting some hooks, too.

“I wanted anything. I caught three stripers and one 7-pounder. It was fun and exciting. This was not like saltwater fishing,” said Lance.

In some ways it was better, even with the water temperature at a bubbling-hot 88 degrees on West Point Lake. 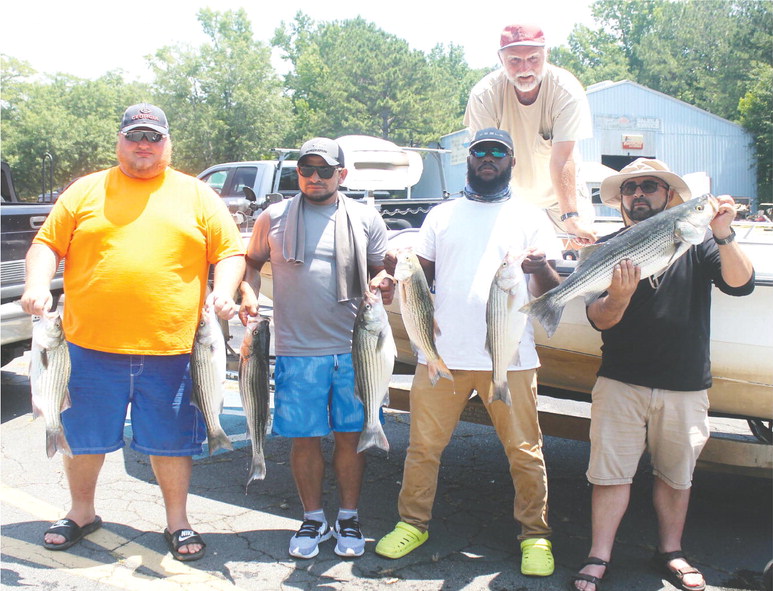 Fishing guide James Jordan and his entourage had a hearty day of striper fishing on West Point Lake. On Friday, the anglers caught 14 striped bass, including these (in the picture above). 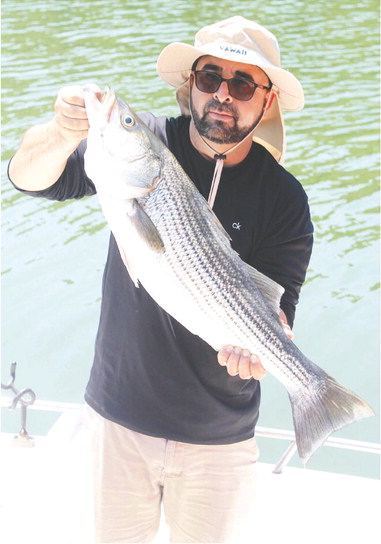 Jose Gonzalez hooked up this 15-pound striper on Friday on West Point Lake. Gonzalez was fishing with a live shad in deep water.