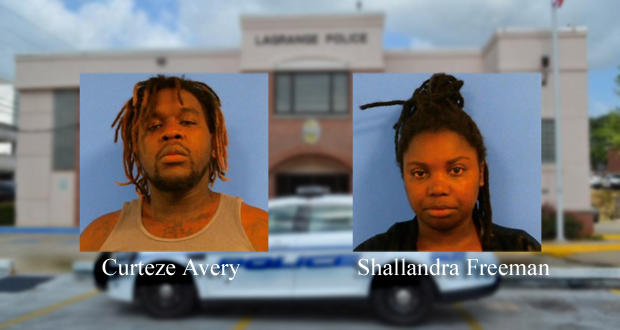 LaGrange Police have identified two suspects believed to be responsible for the stabbing murder of Breanna Burgess. 25-year-old Breanna Burgess, of LaGrange, was found by police officers stabbed to death while they were patrolling the area of Fort Drive early Wednesday morning around 2:35 a.m.

During the subsequent investigation police were able to identify Curteze Avery and Shallandra Freeman as potentially being responsible for the brutal murder.

Police say this incident does not appear to be a random act of violence involving strangers.

LaGrange Police Detectives were able to determine that Avery, Freeman, and Burgess had been acquaintances for years and the victim had been targeted.

Officers were able to locate Avery and Freeman in their Alton Drive home along with evidence from the crime.

Burgess was additionally determined to have been about 20 weeks pregnant (five months) at the time of the murder. As a result, both suspects were charged with Feticide in addition to Murder.

Avery and Freeman were arrested and are currently being held without bond.

This investigation is active and anyone with information is urged to contact members of the LaGrange Police Department.

No further information has been provided at this time.

If anyone has any information on this incident, please contact the LaGrange Police Department at 706-883-2603. Anonymous tips can be provided to the Troup County Crime Stoppers at 706-812-1000.

Information that leads to an arrest in serious cases such as this is often eligible for a significant Crime Stopper reward.