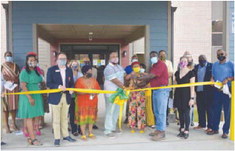 The LaGrange Housing Authority held a ribbon cutting on Wednesday morning for their new Phoenix Landing Apartments on Whitesville Road.

The $12-million facility is part of the city’s Whitesville Road gateway improvement plan to help improve the look of primary entrances to La-Grange. The plan also includes the destruction of nearby apartments in The Phoenix, formerly known as the Benjamin Harvey Hill Homes.

The plan is to replace the homes facing Whitesville Road with a linear park that runs between housing authority homes and the roadway in order to improve the appearance of the corridor. The project is being funded by the Callaway Foundation and the City of LaGrange.

Many residents of the homes that are being removed have already been relocated to Phoenix Landing for a couple months.

“It was about four years ago that the city council adopted a gateway corridor plan and identified the Whitesville Road corridor as the area that we really wanted to focus on,” said LaGrange Mayor Jim Thornton.

Thornton noted that some quick and easy projects were initially done such as widening some sidewalks, but this project marks real change.

“We’re starting to see a radical transformation of the Whitesville Road corridor, not only through the Phoenix, but through what’s about to be done next door,” he added.

The goal with Phoenix Landing was to create modern low-cost homes where people would be happy to live. The new apartments will replace units that are 67 years old. Many Phoenix Landing residents have never lived in a home that isn’t frequently in need of repairs. Upkeep on the new facility is expected to cost the housing authority much less annually than the older homes.

The new facility features 24-hour maintenance, community and laundry rooms, and functions for residents including health screenings. Unit amenities include: central air, washer/dryer connections, and a fully-equipped kitchen with microwave, stove, fridge, and dishwasher. Apartment rent and deposits will be based on income and maximum income limits will apply.