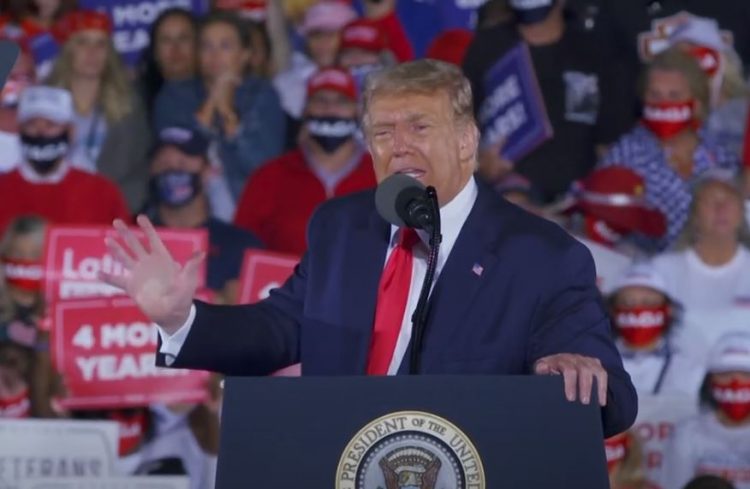 It was nothing short of electric.

Thousands of Trump supporters turned out in support of the President in Macon, Georgia Friday as the incumbent made his case for re-election. Though gates to the 7 p.m. event didn’t officially open until 4 p.m., fans began lining up, in many cases, more than twelve hours in advance.

From experienced rally-goers to first-time attendees, Friday night’s rally brought out supporters from all walks of life.

“There’s a lot of women here,” one woman said to her husband while surveying a growing queue of individuals waiting on the president. A glance at the crowd revealed several “Women for Trump,” “Black Voices for Trump,” and “Latinos for Trump” signs, as a diverse audience came out in support of the President.

In the tense moments leading up to Trump’s arrival, a crowd of thousands waited with music and dance—and with baited breath. The larger-than-life presence of Donald Trump captivated the audience’s attention even before his arrival.

“Is that Air Force One?” members of the crowd could be heard saying every time a plane flew overhead—a common occurrence, as the rally was held at Middle Georgia Regional Airport in Macon.

In true form, the President arrived as the suspense reached its peak, resulting in an uproar of applause and cheers from the crowd. Trump, who recently recovered from COVID-19, looked to be in top form as he walked—and even danced—his way across the stage Friday night to the thunderous approval of his supporters.

“WE LOVE TRUMP!” the crowd spontaneously cheered less than ten minutes after the President’s arrival.

“I love it,” Trump said in response. “No politician, I believe, has ever heard that chant.”

“This started a few weeks ago,” he added. “It’s amazing. I appreciate it very much. I do—and I love this state. I love Georgia.”

And though topics at the rally tended to stay focused on the issues, the President found time to praise Georgia football, as well, while paying homage to Bulldawg great Herschel Walker.

“And of course Georgia,” Trump said after pledging that college football attendance will be back to normal soon. “Not bad—you’re doing okay.

“And who’s the greatest of them all from Georgia? Herschel!” he added. “How good was Herschel Walker? He made a lot of quarterbacks look good.”

The overall tone of Friday’s event, however, was positive, upbeat, and patriotic. Spontaneous cheers of “USA” and “FOUR MORE YEARS” broke out during the rally, as President Trump laid out his vision for re-election. It’s a vision, he says, that includes the greatest economy in American history for all races and classes of people, the end of manufacturing reliance on China, the building of the US military, the return of US troops to US soil, more affordable healthcare for all, including those with pre-existing conditions, and more freedom for parents through school choice.

The President concluded his Macon, Georgia rally with a promise he’s become known for, with the crowd joining him in saying:

“WE WILL MAKE AMERICA GREAT AGAIN!”