School Board Bids Farewell to Hancock 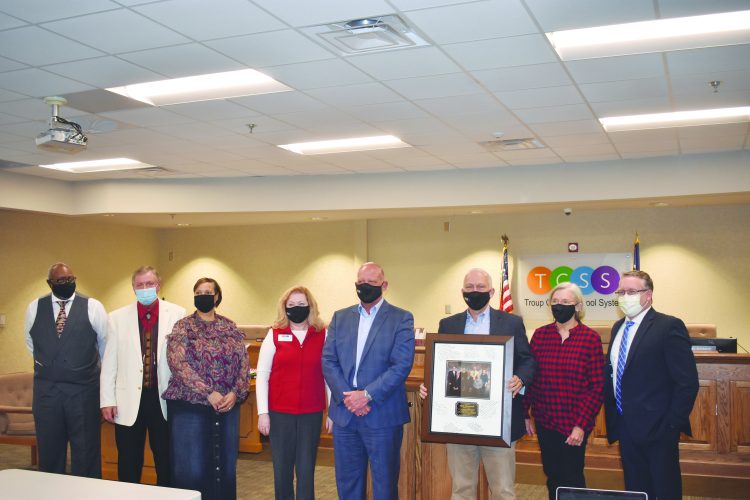 On Thursday, the Troup County Board of Education said goodbye to Board Chairman Kirk Hancock, who presided over his final regularly scheduled meeting.

Hancock decided to not seek a second term prior to the June election. He will be succeeded by Ferrell Blair, who defeated Frank Barnes for the District 2 seat.

School Superintendent Dr. Brian Shumate presented Hancock with framed photo of his fellow board members, who all offered outgoing remarks to the three-year chairman.

“Your time here, Kirk, has been a blessing. There’s no other way to say it. With your leadership we’ve accomplished some great things and set a course for continual improvement,” said Board Member Joe Franklin, calling him an ambassador and champion for the school district and community.

Shumate also praised Hancock noting his professional acumen that he brought to the board, but also his dedication to the children of Troup County.

“He cares deeply about kids and pushing us to get better for higher academic standards, pushing kids to do more than they ever thought they could do, and pushing our school district,” said Shumate.

Hancock noted he was proud of the accomplishments he and his fellow board members made during the last four years and that he was leaving the school district in good hands.

“I think we did make a difference and we did it for the kids and the community. Everyone of us put the kids, the teachers, and the staff above ourselves. That makes me very proud and confident going forward. I think the next four years are going to be awesome,” said Hancock.

After fighting back tears, Hancock had the difficult task of overseeing one last meeting with a full agenda of business including a call for a vote to renew the one-cent E-SPLOST (Education Special Purpose Local Option Sales Tax) and a the acceptance of a Memorandum of Understanding (MOU)with the West Point Development authority and Hyundai Transys for a PILOT (Payment In Lieu of Taxes) agreement.

The board unanimously approved the call for a vote on extending the E-SPLOST.  The measure simply began the process of getting the SPLOST referendum on the ballot in March. The voters will still have to decide next year whether to continue the E-SPLOST.

No specific capital improvement items have been identified for the potential SPLOST.

The board also unanimously signed off on a MOU for the recently announced Hyundai TRANSYS plant in West Point.

Under the MOU, the plant will be built on property owned by the West Point Development Authority and leased to Hyundai and allow the company an 100 percent ad valorem tax abatement for three years, 75 percent for the fourth year, and 50 percent for the remaining 16 years of the 20-year agreement.

The $241-million facility is expected to provide about 678 jobs.